Images from the Moon | An Interview with Mark Robinson

While millions dream of traveling to the Moon, very few have had an opportunity to do it. For now, the next best thing is NASA’s Lunar Reconnaissance Orbiter Camera and the incredibly high-resolution images it transmits back to Earth. The images are fascinating for fans of exploration and photography enthusiasts alike. Select images from the LROC produced by WhiteWall will be featured in an exhibition at the National Air & Space Museum. The organizer of the exhibition, Mark Robinson is a professor at Arizona State University’s School of Earth and Space Exploration as well as the Principal Investigator for the imaging system on the Lunar Reconnaissance Orbiter. We had a chance to ask him a few questions about the project, how the images were created, and the upcoming exhibition. It’s fascinating! How did you first get into studying the geology of the Moon and other planets?
Following the Apollo program in newspapers and magazines and watching astronauts walk on the Moon were a great influence on me, even though I was just elementary school age. I am still in awe that humans actually walked on the Moon, not once but six times. Later, after college I worked for mining companies as an exploration geologist searching for precious metals. By a series of fortunate coincidences, I ended up working with space images of the Earth, and then made it full circle back to the Moon!   Do you find there are a lot of extra challenges in studying places you can’t go visit?
Exploring the Earth is challenging in its own right. For example, as a field geologist you may spend a whole month in a field area collecting samples and mapping the geology. The next step is usually heading back to the lab for detailed analyses and correlating mapped geology with the sample results. Hypotheses are formed, then you go back to same field area and see what ideas stand up to probing and those that fall by the wayside. Most of the time in planetary geology, we cannot take the extra step of collecting samples or even simply turning over rocks or digging holes to see what lies beneath. From remote sensing alone, usually you can never have the satisfaction of knowing for sure that you solved a problem. But what you can do is determine the next steps: what questions to ask, where to go, and what measurements to make. We are doing just that with LROC – we now know the best places to go on the Moon to test many key science questions and locate resources.

You are now the Principal Investigator for the imaging system on NASA’s Lunar Reconnaissance Orbiter. What does that entail?
My main responsibility is making certain we collect the best dataset that enables future exploration and allows new exciting science results. Much of my time is spent working with the talented LROC crew at ASU that undertakes all the day-to-day activities required to collect 450 Gbits of image data every day! These LROC tasks include target selection, monitoring engineering data from the spacecraft, unpacking instrument telemetry and creating the image files from which we put together mosaics and topographic maps, and getting the word out – the Moon is a fantastic destination for exploration! How does the Lunar Reconnaissance Orbiter Camera record and produce the incredible images we see? What kind of camera is it? Is it operated remotely or automated? LROC is actually three cameras: a single Wide Angle Camera (WAC) and two Narrow Angle Cameras (NAC). The WAC was designed to image the whole Moon at moderate resolution in seven colors (ultraviolet and visible wavelengths) and provide stereo overlap for making a global topographic map. The Narrow Angle Cameras were designed to give human scale detail to the surface for planning scientifically engaging and safe landing areas. All three cameras rely on the spacecraft motion to build up images line-by-line. The NACs each only have 5064 pixels, all in a single row. This row of pixels is read out repeatedly as the spacecraft flies above the surface. Since the spacecraft motion is more than 1600 meters per second, it was a real engineering challenge to design the system to read out a row in 0.37 milliseconds more than 52,000 times per image! Daily command loads are built by the ASU LROC team and sent to the spacecraft by NASA’s Goddard Space Flight Center (GSFC) in Greenbelt, Maryland. The spacecraft sends back the images through a dedicated Ka-band antenna in White Sands, New Mexico, which are then routed to ASU through GSFC. The Air and Space Museum exhibition includes a flight spare NAC and WAC (real operating backup copies of those cameras now in orbit about the Moon) so visitors can see what the cameras look like. These amazing cameras were designed and built by a small team at Malin Space Science Systems in San Diego, California.

Since the Lunar Reconnaissance Orbiter Camera has been taking pictures for years, how did you narrow down the selection when you were getting ready to have some printed? Three of us worked on the selection: myself, Emerson Speyerer, and Tom Watters. Emerson is a LROC researcher who has a keen interest in conventional photography, and Tom is a research scientist who works at the National Air and Space Museum. Both Emerson and Tom have spent a lot of time over the past six years working with the LROC image collection in terms of both science and engineering efforts. We picked a collection of images that conveys the beauty and grandeur of the lunar landscape, highlights ongoing science discoveries and gives a sense of the history of lunar exploration.

The complete collection of images taken by the LROC is available online. Why go through all the trouble of organizing an exhibition? Had you done something like that in the past?
We put LROC images and science out in many venues ranging from professional science meetings, elementary schools, public libraries, to art galleries. The idea is to reach as diverse an audience as possible. To many people the Moon is simply a beautiful silvery disc visible in the night sky, but they have no idea what the lunar landscape is really like. The Air and Space Museum receives nearly ten million visitors a year from all over the world, it is my hope this small set of LROC images will make the Moon a real place for many. A place of complex geology, a place that is still changing, a place of opportunity - a whole world that is awaiting our return. The full image collection including hundreds of captioned images is available on the LROC webpage; a sampling is available on an interactive kiosk in the gallery.

How did you decide what kind of prints to have made?
The LROC images are quite large and contain incredible detail – a single NAC image contains over 256 megapixels with 12-bit grayscale resolution (0 – 4095 DNs). To convey all the information contained within a NAC image (or mosaic) requires not only a sharp printing process with a large dynamic range, but one that can also make large prints. There are not many processes that meet all three criteria, so the decision was relatively easy.

The prints are all acrylic photo prints, which offers incredible sharpness, brilliant color and can be produced in formats of up to 106.3 inch. What would you like the people at home to glean from these images? It is my hope that many visitors will walk away feeling that the Moon is a place of beauty and grandeur as well as scientific wonder. That the Moon is a whole world in its own right, waiting for our return, and it is only three days away! Let’s go!

Last question: Why did you choose WhiteWall to produce the photographs?
Outstanding sharpness and color accuracy! 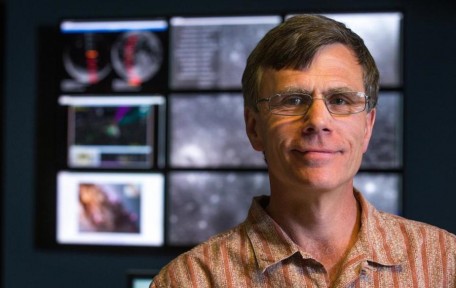